This event was entered anonymously. 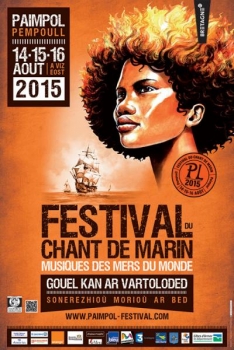 The Northern seas, Africa, the Mediterranean region, the islands – all of them –, the Eastern lands, the Americas, the Celtic countries… The Sea Shanty & World Sea Music Festival had you travelling all around the world, sparking your wildest fantasies. For the next edition (August 14th, 15th & 16th 2015), let’s…

« On dirait le Sud… » famously sang Nino Ferrer. The Sea Shanty Festival, next to take place on August, 14th, 15th & 16th 2015, will accordingly set a southward course. From the southern coasts of Brittany to Occitania, Catalonia to the Basque Country, Andalusia to Portugal, pushing further to the Balkans, Africa or South America, to Louisiana and along the Mississippi River… Countless destinations are waiting for us, preferably warm and sunny, colourful and exotic. As its previous editions, the Festival promises to be filled with emotion, full of (wonderful) musical surprises.

Needless to say, it’ll resume its mission of exploring world musics, sounds and songs. Paimpol harbour will, once again, be a treat to the senses, a place dedicated to dreaming, travelling, escaping, enjoying oneself in a spirit of cheerfulness, discovery and gathering…

No worries Festival lovers, for this 12th edition will retain everything in which lies the Festival’s special appeal: numerous sea shanty and brass bands, bagadoù and festoù-noz, exhibitions and local food tasting sessions, children’s activities… as well as close to two hundred traditional ships, turning Paimpol harbour into the most magical setting.

In 2013, the Sea Shanty & World Sea Music Festival ranked again as the 4th biggest festival in Brittany, while still preserving its “human” dimension, maintaining a warm, family atmosphere. In 2015, the organising team fully intends to carry on this tradition and offer once again the best possible welcome.

Come and join us on Paimpol harbour for the 12th edition of the Sea Shanty & World Sea Music Festival, on August, Friday 14th, Saturday 15th and Sunday 16th, 2015…